Why Do We Anoint With Oil

The first time I saw this happen during a church service I wondered what they were doing. It seemed rather odd. What was this bit with taking a bottle of oil and smearing it all over the person's forehead? I even saw once where they poured the whole bottle over the person's head. Oh, I would have been so angry! What a mess, was my thoughts, as I watch the person standing there with oil dripping from their eyebrows. What were they doing and why?

We didn't always go to the same church but I would find this practice in different ones. It didn't seem to matter if it was a "mainline" denominational church or one of those that had broken off of the "mainline" and called themselves "Non-denominational" or "Interdenominational". This practice with the oil bottle seemed to be there.

Then the pastor read another scripture where it said if the people are sick for them to come and have the elders anoint them with oil and pray for their healing. Here it was. This was what I had seen them do in the other churches. As a result I concluded this was the full purpose and left it at that until one day an evangelist came to town.

I had heard this evangelist was going to do a teaching about anointing oils which again caught my interest.

The evangelist talked of wonderful miracles and of healings of emotions of people he had been involved with first hand. He talked of others being healed of illnesses and diseases such of cancer, diabetes, people who were paralyzed, had chronic allergies, Parkinson disease and others infirmities that none of us had heard of before being supernaturally healed.

The evangelist went on to tell how the anointing oils were used and how the oils actually were symbolic of the Holy Spirit.

After listening to his teaching I decided to study and learn more on my own.

In searching out the Holy Bible I found an interesting verse: "Isaiah 10:27 - It shall come to pass in that day that his burden will be taken away from your shoulder, and his yoke from your neck and the yoke will be destroyed because of the anointing oil."

How interesting? Anointing oils break bondages? The evangelist had talked about people being healed of emotional issues. Wow, I sure could use some help in breaking some bondages in my life. But was this all?

Actually I found many places throughout the scriptures where the anointing oils were used. In 1 Sam 16:13 - "Samuel took the horn of oil and anointed him (David) in the midst of his brothers; and the Spirit of the Lord came upon David from that day forward."

Later on in the scriptures when David became King God speaks of him as a man after God's heart. Imagine - When he was anointed with the oil the Spirit of the Lord came upon him from that day forward. I sure would like to have the Spirit of God on me all the rest of my life.

But was this Magic or anointing?

Throughout the Old and New Testament of the Holy Bible we are told of the anointing oils being used.

During my studies people would tell me anointing oil was in the Holy Bible but it wasn't for today and these churches that used it were fanatical. One day I ran across a scripture in Exodus 30 of the Holy Bible. The scriptures tell us they, the oils, are "forevermore". When I looked it up I found that forevermore means just that....forever. This meant the uses of the Biblical Anointing Oils are important for today as much as they were in the days of old.

Since the beginning of my studies I have been blessed to see others truly healed. One I will never forget. She was a woman who had been in a serious auto accident leaving her confined to a wheelchair for life. She came to the church because the pastor had been so kind to her. She was not a believer and didn't usually come. But that day she did. That day I personally watched her stand up and walk away from her chair. The next time I saw her she was working in the food bank helping others in the community. She had been completely restored. 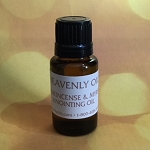